Talking Science 101: Saying All of the Science with None of The Jargon

Have you ever been asked how the body grows blood cells, how stars form, or what roams the ocean depths? Importantly, can you explain to laypeople how scientists address these questions? Importantly, can you explain to laypeople how scientists address these questions? With such knowledge, the public could understand the benefits of science and recognize the threats presented by pseudoscience. Unfortunately, many people comprehend neither the language nor methods of science and scientists generally receive little guidance in how to explain these concepts to them. Even worse, this lack of communications training excludes researchers from many non-academic careers and makes conversing with funding sources challenging. Thus, young scientists must learn to communicate their research in plain language and one opportunity to do this in Philadelphia is Start Talking Science (STS). STS is a science outreach program created in 2014 by Drexel University professor and physicist Dr. Christina Love. It consists of a science communications training workshop followed by a poster session where scientists present their work to the public. To participate, science, technology, engineering, and math researchers submit a non-technical research summary. If accepted, they then submit a poster free of jargon that is designed for a lay audience. Participants next attend a two-hour workshop where they and communications coaches work in small groups to critique each other’s posters and determine how to best explain their research. Finally, revised posters are presented at the public poster session. I participated in the third STS program in 2016, submitting the summary in May, drafting the poster in July, and attending the workshop in August. While participating in this program, it became rapidly obvious that the communications strategy employed in it would have to differ from what I learned in graduate school. Writing in the research world is technical and results-oriented; the reader is assumed to be a fellow expert. Scientific jargon, however, is an obstacle for laypeople. “The language that we use is the intimidating part,” noted University of Pennsylvania (UPenn) biomedical graduate student and STS participant Katherine Palozola. “If you start with definitions and explaining the jargon to them and use that as your building block, then I think you’ll be surprised how easily people pick up on the ideas and can follow you.” 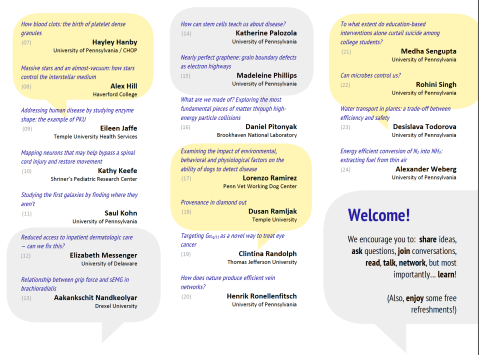 Emphasis can also be placed on the background, research question, and methods rather than the complex technical results. In my poster for example, which concerned alternative splicing in developing red blood cells, I focused on explaining what blood cells do, what genes and gene transcripts are, and how we acquire blood cells and gene transcripts from laboratory animals. A pair of heat maps concluded the poster to show what actual data looks like and to illustrate what we learned.

The workshop critiques covered clarity of concept, poster organization and aesthetics, and how much emphasis to give to the background, methods, and results. Importantly, the presenters’ and coaches’ expertise were extremely varied; nobody was an expert in anyone else’s field. My group, for example, which was comprised of three presenters and two coaches, included a computer scientist, an astronomer, a physicist, a communications expert, and myself, a molecular biologist. We could thus judge one another’s posters from a non-expert perspective and the resulting advice was very beneficial. As Katherine recalled, “there was two sides to it [my poster] and I ended up inverting them because of the comments I received at that session. It turned out to be much more clear, and I [had originally] thought I had a really clear poster.” 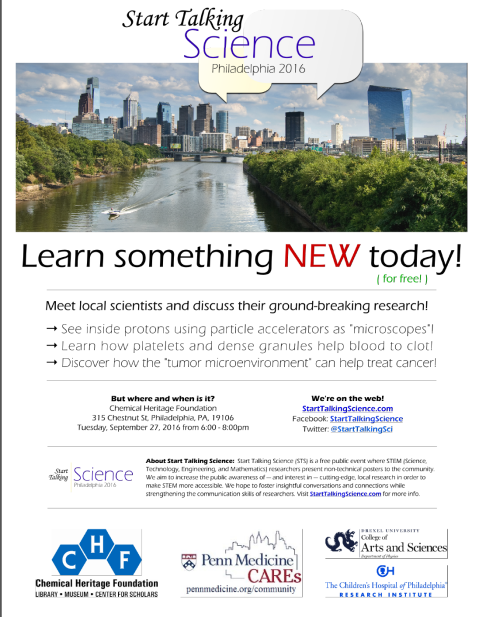 The poster session was held on the evening of September 27th, 2016 at the Chemical Heritage Foundation in Philadelphia’s Old City neighborhood. 24 posters were presented and over one hundred individuals attended. While many presenters represented UPenn, others hailed from the Children’s Hospital of Philadelphia, Drexel University, Temple University, Thomas Jefferson University, Haverford College, the University of Delaware, and Brookhaven National Laboratory. Topics in biology, medicine, chemistry, physics, astronomy, oceanography, and computer science were covered, and there was a heavy focus on biomedical research. Interactions with attendees were quite varied, with some progressing through the whole poster and others focusing on the background or methods. Perhaps most rewarding were the conversations on topics that were related to, but not directly addressed, by the poster. For example, one of my figures illustrated the different blood cells that arise from stem cells, prompting one attendee to inquire about the nature of stem cells. Another figure explaining gene transcript splicing prompted a conversation about how the proteins that splice RNA are themselves created from RNAs. Both young and adult science-enthusiasts benefitted from this event. “I thought it was a great opportunity for people in the community of all ages to learn about science…” noted Abigail Behrends, communications coordinator for the UPenn Institute for Regenerative Medicine and co-presenter with Katherine.

“I don’t think they [laypeople] have the opportunity often to do anything other than google. To actually talk to a human being I think is an important interaction, an important way to learn.”

“We had a five-year-old come to our poster, who was the most interesting person to talk to the entire night!” Finally, for scientists in attendance and those presenting, the diversity of topics gave them a chance to leave their comfort zone and explore new fields. As attendee and Drexel University neutrino physicist Dr. Yung-Ruey Yen noted, “it was actually more interesting to see the stuff outside of the usual physical sciences.. to see what’s going on in biology.”

The benefits of the poster session and communications coaching were numerous. Presenters learned to strip their research down to the basic concepts and explain it without jargon. Attendees learned about actual research occurring around Philadelphia and got to inquire about whatever topics were on their minds. Researchers were reminded that science extends beyond their niches. Most important of all, it was an opportunity for laypeople to interact with actual scientists. As Katherine noted, “I don’t think they [laypeople] have the opportunity often to do anything other than google. To actually talk to a human being I think is an important interaction, an important way to learn.” Scientists and laypeople will have additional chances to interact during future STS events. 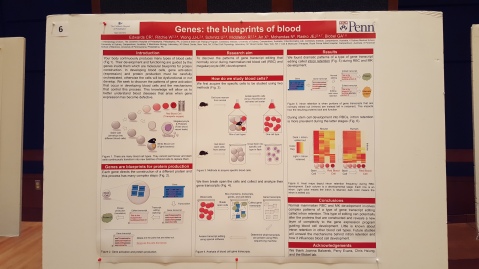 Happy Summer Postdocs! Volume 8, issue 3 is now available. Inside this issue: A Dire High: Philadelphia on the front lines of the Opioid epidemic The city’s battle to be the first in the US with a safe injection facility: page 2 Health, Insurance and the Postdoc at Penn Navigating your options: page 4 Meet the […]